Mad Catz and its famed R.A.T. Mouse are back from the dead, and that's great news for anyone who likes to tweak every aspect of their gear.

— Recommendations are independently chosen by Reviewed’s editors. Purchases you make through our links may earn us a commission. 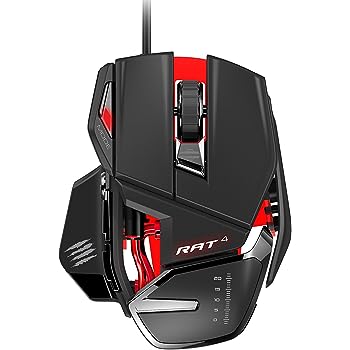 Follow all of Reviewed’s CES coverage as it happens. To get a sneak peek at the latest product trends delivered straight to your phone, sign up for text message alerts.

The newly unveiled B.A.T. 6+ gaming mouse from Mad Catz is designed to cover all the bases and looks like the kind of mouse you’d find on Batman’s desk in the Batcave. The headline feature is the Dakota mechanical switch, which cuts response time to just 2 milliseconds. The ambidextrous design is fully customizable with switchable side skirts and palm rests. There’s also an optical sensor inside that goes up to 16,000 DPI, 10 programmable buttons, and internal storage for up to five profiles.

We’ve seen a flood of excellent gaming mice over the last couple of years, but most of them don’t cater to southpaws. The ability to add wings on either side or change up your palm rest is also rare and Mad Catz suggests that this will enable gamers to find the perfect setup for their preferred grip style, whether that’s palm, claw, or fingertip.

For a wired gaming mouse like this one to catch the attention of gamers, it needs to perform when it matters. Esports competitors and dedicated amateurs are always looking for an edge, so the Dakota switch could be key. Mad Catz says it uses a new signal detection technology that’s 60% faster than other mechanical switches. We’re interested to see if the mouse lives up to that claim.

© Mad Catz The Mad Catz B.A.T. 6+ comes with an extra palm rest and two side skirts

With a Pixart PMW 3389 optical sensor topping out at 16,000 DPI, which allows for movement of 400 inches per second, and a 2,000 Hz polling rate the B.A.T. 6+ is on a par with the top gaming mice in terms of performance. The ability to customize a generous 10 buttons to your preferences should provide enough options for different game genres and satisfy most gamers.

The fact you can save up to five profiles on the mouse itself is good for gamers on the go, and this is the first mouse to use Mad Catz’s new Cyborg Engine. The Cyborg software promises to make configuration a breeze and it’s also where you’ll select lighting effects, though we can only see a couple of small lighting zones on the B.A.T. 6+ in the press images.

It looked like Mad Catz might be going out of business a couple of years ago, so it’s nice to see fresh releases from this beloved peripheral brand and it will be interesting to see where the new management takes things.

The Mad Catz B.A.T. 6+ is a wired mouse and comes with a 5.9-foot braided cable. You also get one extra palm rest and two side skirts in the box. The release is slated for late February. The only thing we don’t yet know is the price.

You hear a lot about mechanical switches in keyboards, but not so much in mice because… well, most mice use mechanical buttons. However, this month Mad Catz announced two optical gaming mice with switches that the company hopes you will think about a bit more, promising a 2ms response time thanks to some new technology.

The switch is called Dakota, and it was unveiled last week with the company’s latest addition to its highly customizable R.A.T. line, the DWS. The idea behind Dakota is that the springs in traditional mechanical mice switches wear out over time, creating extra vibration that can muddle the signal. Mad Catz claims that its signal detection technology will filter out this echo, keeping the mouse as accurate to your actual clicks as possible. This comes at a time when rival peripheral maker Razer has been experimenting with optical switches in some of its mice.

The DWS, announced last week, offers wireless connectivity via both 2.4 GHz RF and Bluetooth 5.0, and a 16,000 dpi optical sensor. Like its predecessors in the R.A.T. line, the DWS has an adjustable palm rest and the sides swap out. And it has a barrel scroll wheel on the side — it isn’t a pretty mouse, but FPS players will appreciate how easy it is to switch weapons with the DWS.

The wired B.A.T. 6+, announced today at CES, takes things a bit further with Mad Catz’s new Cyborg Engine software. It should offer closer games integration, as well as plenty of lighting effects. The B.A.T. 6 is a lot sleeker than the DWS, with the company claiming the design was inspired by “spaceships, hypercars, and batmobiles.” While it doesn’t look all that different from most gaming mice on the market, the slimmer design means it is ambidextrous, so lefties will find it comfortable, and it can easily accommodate different grips on the mouse, from claw to fingertip.

Both mice are set to ship next month, though the company hasn’t revealed pricing for either model.